My Romance with the Warped Side of the Universe: From Black Holes and Wormholes to Time Travel and Gravitational Waves 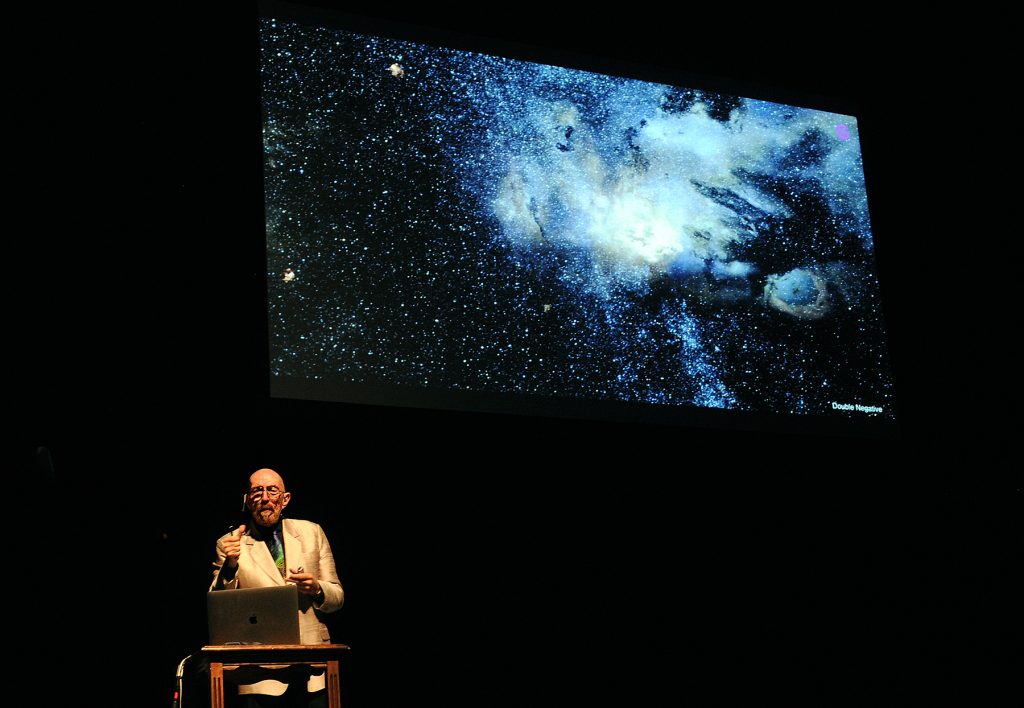 Frey lecturer Kip Thorne discussed his romance with the “warped side of the universe.” (photo by Donn Young)

Theoretical physicist and Nobel laureate Kip Thorne combines a love of art and science in his work, and he shared that passion with an audience that packed Memorial Hall on Thursday evening.

Thorne discussed “My Romance with the Warped Side of the Universe: From Black Holes and Wormholes to Time Travel and Gravitational Waves,” as the 2018-19 Frey Foundation Distinguished Visiting Professor in the College of Arts & Sciences. His talk marked the 25th anniversary of the Frey lecture. 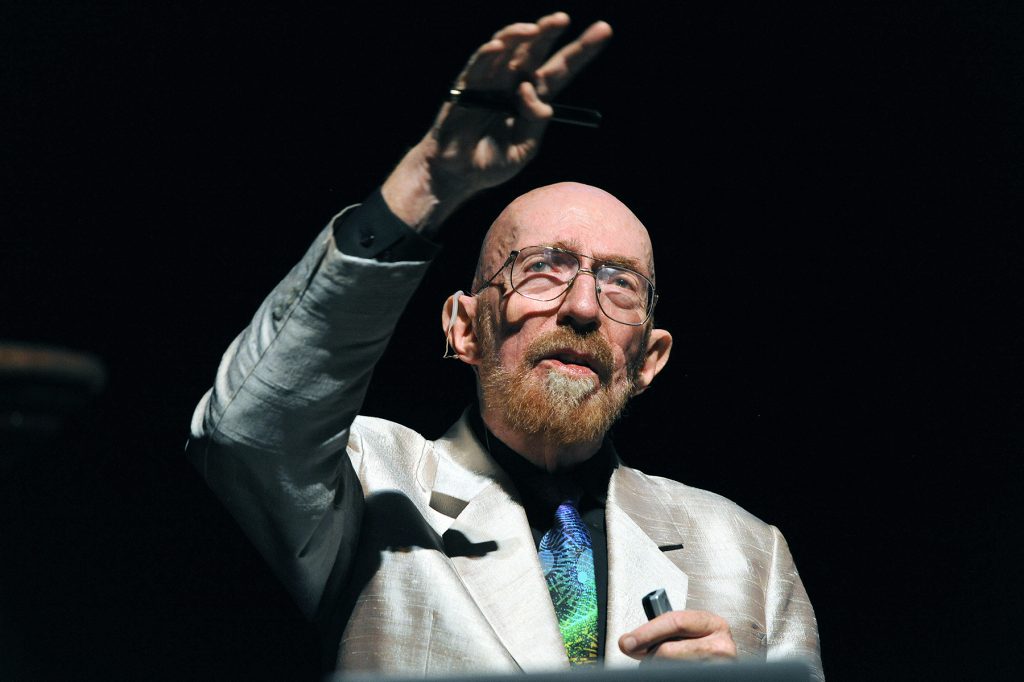 Thorne and his collaborators won the Nobel Prize in Physics in 2017. (photo by Donn Young)

Thorne, a professor of theoretical physics emeritus at Caltech, was awarded the Nobel Prize in Physics in 2017, along with Rainer Weiss and Barry C. Barish, for their contributions to the observation of gravitational waves. This observation confirmed a key piece of Einstein’s Theory of General Relativity. He was also an executive producer on Christopher Nolan’s 2014 film Interstellar, where he served as a scientific consultant.

Before Thorne spoke, actors from PlayMakers Repertory Company portraying Galileo and his friend Sagredo re-enacted a scene from the theater company’s production of “Life of Galileo,” which opens Feb. 27.

The lecture, play and more are part of “A Constellation of Cosmos Events at Carolina,” sponsored jointly by the College with the Morehead Planetarium and Science Center and PlayMakers.

Interim Chancellor Kevin M. Guskiewicz said that at UNC-Chapel Hill, the richest kinds of collaborations and insights happen when people from diverse disciplines come together, and that Thorne was a great example of that.

“He has spent the last part of his career bridging the divide between the sciences and the arts, making abstract scientific concepts understandable to those of us who do not have a background in physics or astronomy,” Guskiewicz said.

Thorne shared the excitement of making the “big discovery” that led to the Nobel Prize. He said his research group “wanted to do for gravitational waves what Galileo did for electromagnetic waves.”

Scientists working with LIGO — Laser Interferometer Gravitational Wave Observatory — made the breakthrough discovery of gravitational waves arriving at Earth from the distant universe on Sept. 14, 2015. 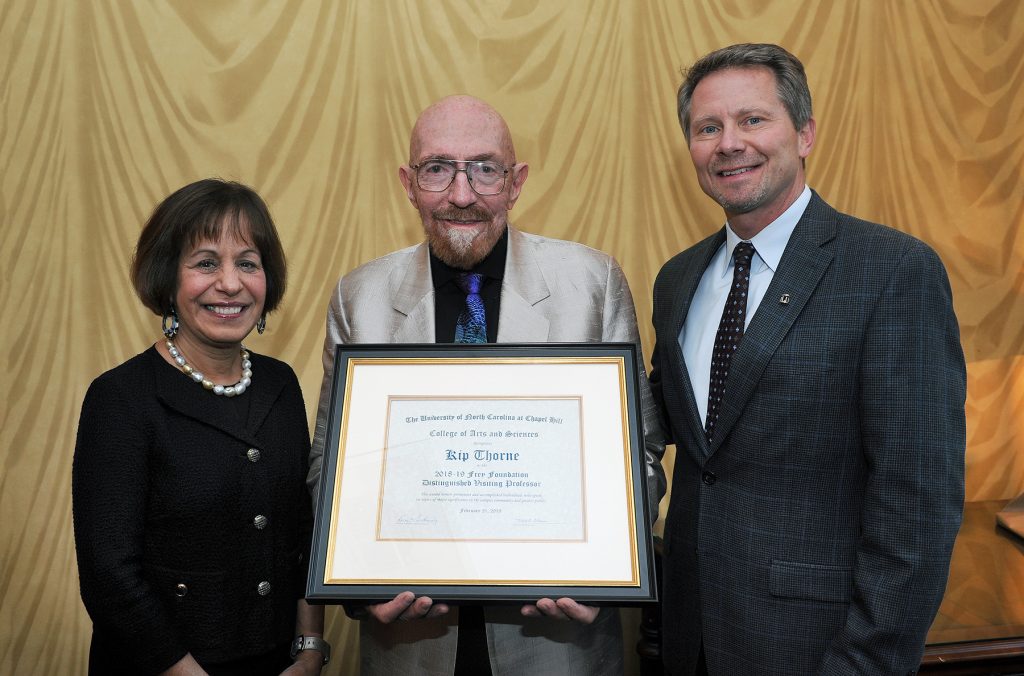 “1.3 billion years ago in a galaxy far, far away two black holes circled around each other …. They came crashing together and produced a huge burst of gravitational waves,” Thorne said. “The power output was 50 times larger than the total power output of all the stars in the universe put together. It was the biggest, most powerful explosion except for the Big Bang, the birth of the universe itself.”

These days, Thorne said he spends more time nurturing his artistic side. He is working on a book, “The Warped Side of the Universe,” with artist Lia Halloran that will feature his poetry.

“I was an astrophysicist for 50 years, and I decided I wanted to do something different for the next 50 years,” Thorne said.

Former Chancellor Carol L. Folt, who also spoke at the event and along with Guskiewicz helped to bring Thorne to Chapel Hill, said he is an example of what can be achieved when creativity and hard work fuse to push the boundaries of what is known today.

“Perhaps Stephen Hawking, Dr. Thorne’s longtime friend and colleague, was thinking about him when he said, ‘Remember to look up at the stars and not down at your feet. Try to make sense of what you see and wonder about what makes the universe exist. Be curious.’”

The Frey Professorship is one of the highest honors bestowed by the College to distinguished public leaders. Alumnus David Gardner Frey (BA ’64, JD ’67) chairs the Frey Foundation. 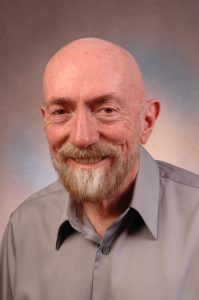 “My Romance with the Warped Side of the Universe: From Black Holes and Wormholes to Time Travel and Gravitational Waves”

Theoretical physicist and Nobel laureate Kip Thorne will be the 2019 Frey Foundation Distinguished Visiting Professor, giving a free lecture that will be an engaging evening of stellar science for all audiences.

Thorne was until 2009 the Feynmann Professor of Theoretical Physics at Caltech (where he still holds the emeritus title for this professorship), but retired to take up a new career career in writing and collaborations at the interface between science and the arts. That led to him being an executive producer and scientific adviser on the 2014 blockbuster film Interstellar. He has collaborated on other multimedia projects as well, and is known for his ability to explain these weighty scientific concepts in ways that non-scientists can understand.

In 2017 Thorne was awarded the Nobel Prize in Physics, along with colleagues Rainer Weiss and Barry C. Barish, for their contributions to LIGO  (Laser Interferometer Gravitational Wave Observatory Project) and the observations of gravitational waves, which occurred on Sept. 14, 2015. That observation confirmed a key piece of Einstein’s Theory of General Relativity. Thorne was a close friend of Stephen Hawking’s and is even depicted in the 2014 biopic The Theory of Everything. The two had a famous wager about whether Cygnus X-1 was a black hole—Thorne won the bet.

In 2018 he was awarded the Lewis Thomas Prize: Honoring the Scientist as Poet – “the rare individual who bridges the worlds of science and the humanities.”

The Frey Lecture is part of the A Constellation of Cosmos Events at Carolina, jointly sponsored by the College of Arts & Sciences with the Morehead Planetarium and Science Center and PlayMakers Repertory Company. The events include:

The Frey Foundation Distinguished Visiting Professorship is one of the highest honors bestowed by the College of Arts & Sciences at UNC-Chapel Hill to distinguished public leaders. Past speakers include Nina Totenberg, Fareed Zakaria, E.L. Doctorow, Ted Turner, Alice Walker and Christine Todd Whitman. This year marks the 25th anniversary of the lecture, with journalist Sidney Rittenberg ’41 as the inaugural speaker in 1994.

The Frey Foundation was established in 1974 by Edward J. and Frances Frey of Grand Rapids, Michigan. Their son, alumnus David Gardner Frey, BA ’64, JD ’67, is chairman of the foundation and a longtime supporter of UNC’s College of Arts & Sciences.