A Conversation with NPR’s Nina Totenberg: The Supreme Court and the Presidency 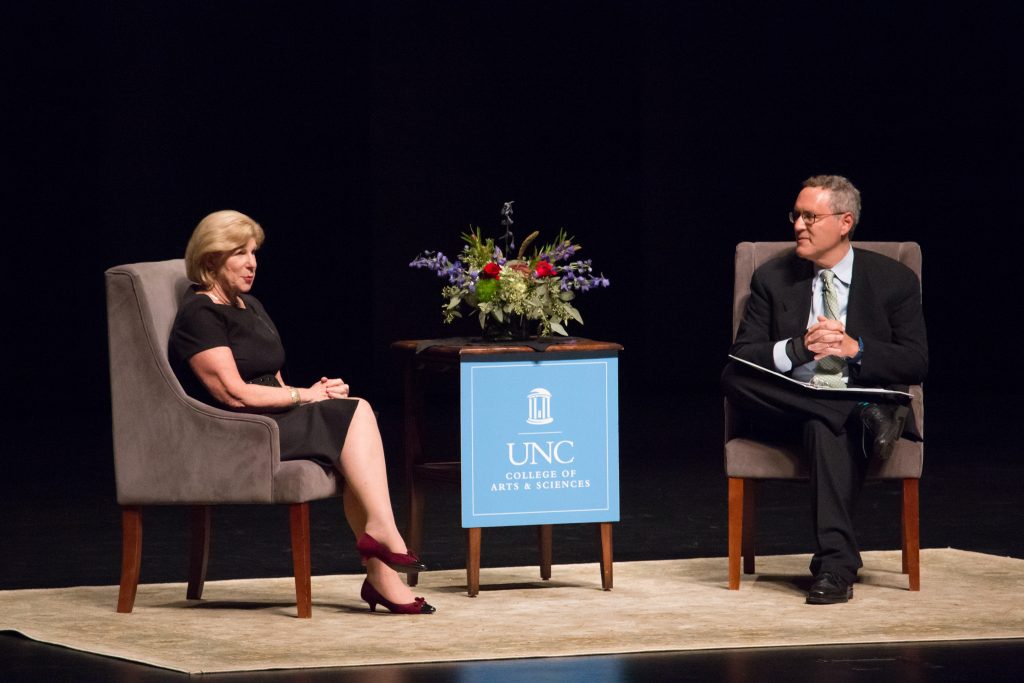 Nina Totenberg in a conversation on “The Supreme Court and the Presidency” with UNC School of Law’s Michael Gerhardt. (photo by Kristen Chavez)

National Public Radio’s award-winning legal correspondent Nina Totenberg said she admired the late Supreme Court Justice Antonin Scalia, who passed away in February, “as a person, as a friend and as a story.”

In a talk before a packed audience at Memorial Hall on the University of North Carolina at Chapel Hill campus Tuesday night, Totenberg recalled a conversation she had with Justice Ruth Bader Ginsburg about Scalia.

“I interviewed Ginsburg for a book that’s coming out about her writings. And I said, ‘What did you love about him?’” Totenberg said. “Ginsburg [replied], ‘It’s like that movie ‘Roger Rabbit.’ He makes me laugh. He was the best storyteller, the best company. We both cared about how an opinion was written and the words on the paper.’”
In opening remarks, Chancellor Carol L. Folt said, “So many of us gather our news in different ways … but if you’re like me, there’s nothing like listening to the news, and I have been listening to Nina Totenberg for years.”Totenberg came to campus as the Frey Foundation Distinguished Visiting Professor in the College of Arts and Sciences. She discussed “The Supreme Court and the Presidency” in a conversation with Michael Gerhardt, Samuel Ashe Distinguished Professor at the UNC School of Law.

Gerhardt asked Totenberg her thoughts on the current delay in the appointment of President Obama’s nominee, Merrick Garland, to fill Scalia’s seat.

“If this becomes the new normal, you could have a court that’s pretty small. It’s bringing the same kind of gridlock to the courts that has existed in Congress increasingly over the last decade or two,” Totenberg said. “Merrick Garland has become the person waiting the longest — sitting in limbo — as a Supreme Court nominee. … What happens when somebody else gets sick or dies?”

Even though Totenberg has covered the Supreme Court for more than four decades, she said she didn’t always want to be a legal correspondent.

“I got assigned to cover the Supreme Court. As it turns out, I was really quite good at it,” she said. “I was not a lawyer so I actually had to communicate with people. … It’s extremely complicated to do an audio piece that works because there is a lot of legal mumbo-jumbo… . The challenge was to find a way to do oral argument stories so that people had the feeling of being there. And for those of you who listen, I do it by trying to capture the essence of the argument.” A highlight of the evening was during the Q&A at the end of the talk, when a member of the audience asked Totenberg, “If nominated to the Supreme Court, would you serve?”“I have to say, I knew this would be a big story, but I also knew if Anita Hill went to ground and didn’t stand by what she was saying, it could wither on the vine,” said Totenberg. “But this just blew sky high.”

The question was met with laughter from the audience, then applause.

To wrap up the evening, College Dean Kevin M. Guskiewicz presented Totenberg with an award honoring her with the Frey Foundation Distinguished Visiting Professorship, created in 1989 to bring prominent individuals to speak on matters of major significance. The Frey Foundation is chaired by alumnus David Gardner Frey (B.A. ’64, J.D. ’67.)

See a round-up of Tweets about the lecture with the hashtag #TotenbergUNC here.

By Kim Spurr, College of Arts and Sciences 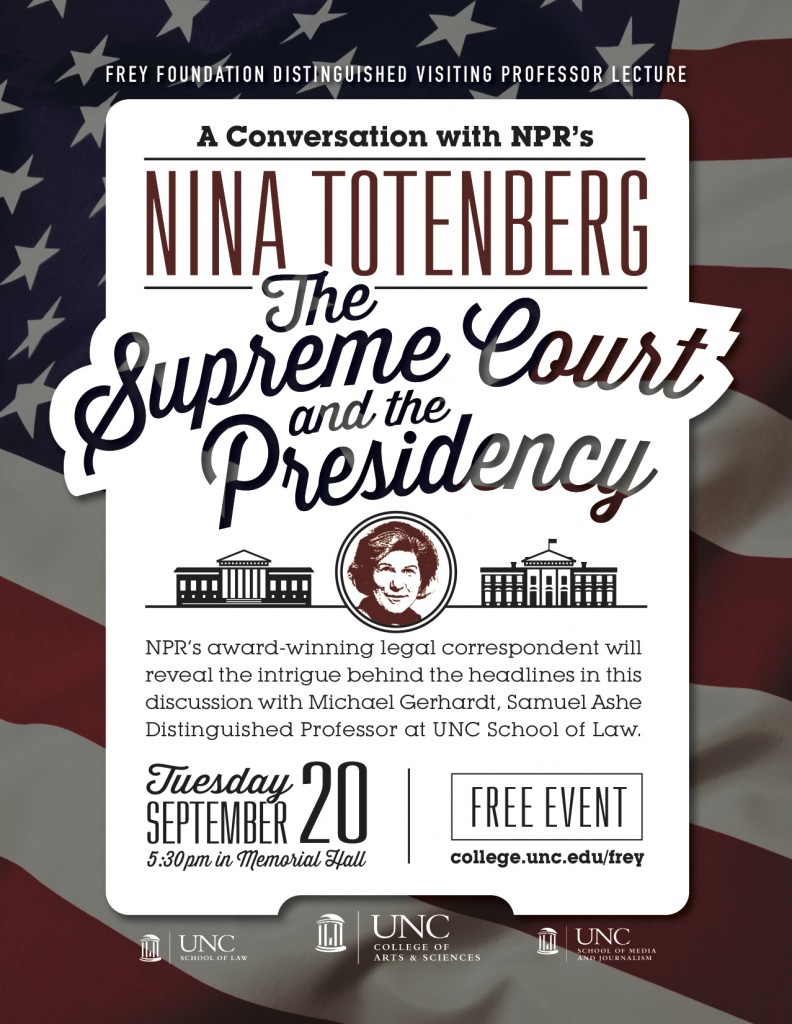 Nina Totenberg will appear on campus as the 2016-17 Frey Foundation Distinguished Visiting Professor in the College of Arts and Sciences at UNC-Chapel Hill.

National Public Radio’s award-winning legal correspondent Nina Totenberg will reveal the intrigue behind the headlines in this discussion with Michael Gerhardt, Samuel Ashe Distinguished Professor at UNC School of Law.

Totenberg’s coverage of legal affairs and the Supreme Court has won her widespread recognition. Newsweek says, “The mainstays [of NPR] are Morning Edition and All Things Considered. But the crème de la crème is Nina Totenberg.” The College of Arts and Sciences wishes to thank its promotional partners, UNC’s School of Law and School of Media and Journalism.

Parking tips for Memorial Hall events can be found here.

Mixed Casual Korean Bistro’s food truck will be on hand from 5 to 7 p.m.

Listen to an interview on WCHL radio with Michael Gerhardt:

See a round-up of Tweets about the lecture with the hashtag #TotenbergUNC:

[View the story “Nina Totenberg at UNC” on Storify]